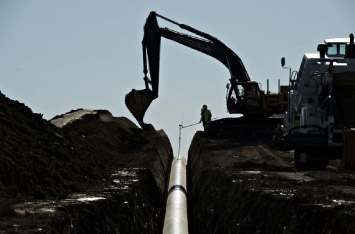 TORONTO, Dec. 23, 2013 /PRNewswire/ - Pacific Rubiales Energy Corp. (TSX: PRE) (BVC: PREC) (BOVESPA: PREB) announced today that it has reached an agreement to sell its 5% interest and transportation rights in the Oleoducto Central S.A. ("OCENSA") oil pipeline in Colombia for a total cash consideration of U.S.$385 million (the "Transaction") to a consortium led by Darby Private Equity ("Darby"), the private equity arm of Franklin Templeton. The investment will be made by Darby's Fondo de Infraestructura de Transporte de Colombia ("FINTRA"). The OCENSA pipeline interest and transportation rights were acquired from the Company's previously announced acquisition of Petrominerales Ltd. ("Petrominerales"), which closed on November 28, 2013.

The transaction includes the sale of the 5% equity interest in the OCENSA pipeline, along with the accompanying transportation capacity rights, including current and future capacity expansions. The Company has entered into a ten year agreement to secure transportation capacity for a take-or-pay incremental charge in addition to the regulated tariff on the pipeline. The transaction is expected to close in early 2014.

"This transaction represents an attractive deal for both companies. Darby will receive a steady and secure rate of return on its investment. Pacific Rubiales will receive U.S.$385 million in cash, which we will use to pay down the debt incurred by the Company in connection with the Petrominerales acquisition, reducing the acquisition cost to approximately Cdn.$1.2 billion and significantly improving the acquisition metrics.

"In addition we have secured approximately 29 Mbbl/d of long-term transportation capacity in the largest and most secure oil pipeline in Colombia, which is very strategic to the Company's plans to increase its heavy oil production out of the southern Llanos basin. Along with our existing preferential capacity rights in the OCENSA pipeline and our interests in the new Bicentenario oil pipeline, this additional capacity in the OCENSA pipeline will largely eliminate our need for major long-haul trucking and is expected to reduce our overall transportation costs in the future."

Itaú BBA acted as sole financial advisor on this transaction.
Pacific Rubiales, a Canadian company and producer of natural gas and crude oil, owns 100% of Meta Petroleum Corp., which operates the Rubiales, Piriri and Quifa heavy oil fields in the Llanos Basin, and 100% of Pacific Stratus Energy Colombia Corp., which operates the La Creciente natural gas field in the northwestern area of Colombia. Pacific Rubiales has also acquired 100% of Petrominerales Ltd, which owns light and heavy oil assets in Colombia and oil and gas assets in Peru, 100% of PetroMagdalena Energy Corp., which owns light oil assets in Colombia, and 100% of C&C Energia Ltd., which owns light oil assets in the Llanos Basin. In addition, the Company has a diversified portfolio of assets beyond Colombia, which includes producing and exploration assets in Peru, Guatemala, Brazil, Guyana and Papua New Guinea.
The Company's common shares trade on the Toronto Stock Exchange and La Bolsa de Valores de Colombia and as Brazilian Depositary Receipts on Brazil's Bolsa de Valores Mercadorias e Futuros under the ticker symbols PRE, PREC, and PREB, respectively.

FINTRA is a Colombian-based infrastructure fund managed by Darby-Colpatria Capital S.A.S., a joint venture between Darby and Grupo Colpatria.